All You Need To Know About 8K Television by Canadian Tire 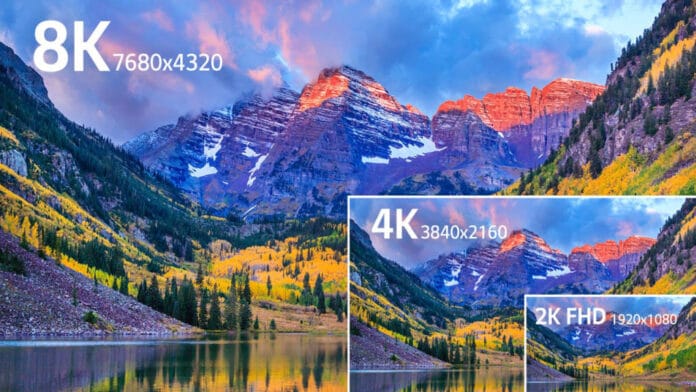 It’s been less than a decade since the phenomenal 4K television was released, and most of us are still getting used to seeing our favourite TV shows on such an immersive display. Giant tech companies took their abilities further and presented us with the new 8K television in 2020.

This impressive display functions better than its predecessors and gradually found its place within the homes of content creators and regular individuals. This article aims to provide some information on this technological advancement and help you decide whether this gadget should replace your current screen.

If you’re like most individuals who understand basic math, you probably assume that an 8K TV will have double the 4K TV resolution. While this assumption is logically sound, it is not the case.

The term “4K” actually originates from the digital cinema side, which has a horizontal resolution of 4,096; thus, approximating “4K”.

However, an 8K Television has 16 times the pixels of an HD TV and four times the 4K TV pixels. This analysis equates to 7680 x 4320, or approximately 33 million pixels. Ultimately, you’ll be getting immersion like no other.

Since you understand the definition of 8K and the distinction between a 4k and an 8k television, it’s time to outline the benefits. What features does this screen contain that will make you want to own it?

As previously explained, 8k televisions have four times the pixels of a 4K TV, meaning you get to see every detail of your favourite movie, TV show, and even video games (if you fancy them).

The numbers don’t lie as the display of 7680 pixels by 4320 pixels provides exquisite picture quality and reveals colours and shades you never noticed before. It’s a worthwhile option if you want total immersion when watching your favourite programs.

2. Remains Relevant in the Future

Although we haven’t begun mass producing 8k content for regular consumption, this factor will change in the coming years as tech companies invest more resources into better graphics. For example, the current consoles – especially the PlayStation 5 and Xbox Series X – are capable of showing content at 8k.

It’s only a matter of time before movies are released in 8k, and cameras can produce similar quality videos. Therefore, investing in an 8k television keeps you secured for the Future when graphics exceed the realm of 4k.

Since the first 8k television was launched, several manufacturers have gone to their drawing board to think of ways to create the same technology and a lower price. Fortunately, they were successful as the current price of an 8k TV is lower than when it first appeared.

This price decline is similar to when 4k was launched and gained popularity; manufacturers noticed the innovation and decided to mass-produce cheaper versions. Today, almost every home has a 4k TV.

Things to Consider When Buying an Entertainment Solution for Your Home

It’s important to note that 8k televisions are massive, and like any entertainment gadget, you need to consider the dimensions before installing it in your home.

Therefore, take a tape and measure the space you have available and see if it’s appropriate for the gadget. Buying a TV that’s too big for your room will feel uncomfortable, and buying one that’s too small will feel out of place.

Also, consider your current electronics and see if they need to be rearranged. These appliances include your speakers, stereo, DVDs, and many. Performing this action will help you know if you have enough space or need to get smoothing a bit smaller.

Besides space and size, you also need to consider your budget and vendor as they significantly influence your buying decision. Buying Big Screen TVs from an affordable dealer like Canadian Tire is a smart choice as their offerings are cheap and come with a warranty. You essentially pay less every day at Canadian Tire.

If you’ve got extra cash in the bank to invest in an 8k TV for better display quality, then these three screens are your best bet.

The Q950TS is Samsung’s flagship 8K TV and is the yardstick for upscaling to 8K from HD or 4K sources. It possesses OTS+ speakers, a zero-bezel design, and a dimension that’s an excellent feature for a premium TV.

The Sony Z8H/ZH8 8K TV is one of the cheaper 8k televisions that emerged shortly after the first launch. It possesses approximately 2,500 nits of brightness, which makes HDR pictures look breathtaking. You can also expect immaculate, soothing sounds from the powerful built-in speakers.

If you live in a small apartment with a minimal budget, the Q800T 8k TV is for you. This gadget is easily affordable and has the same price range as some high-end 4k TVs. It has an impressive display with 31 million pixels, an excellent audio experience, and durability. It’s a must-have in your home.

Ultimately, 8K televisions are the Future, and if you wish to enjoy fantastic video and audio in one package, this entertainment device is for you. However, it’s advisable to buy from a dealer that understands your needs and provides products that won’t break your bank.

Consider visiting Canadian Tire and make an enjoyable purchase.
Or you can compare TVs online with Shopbot

Our recommendations are dedicated to helping you find the right product at a great price. We may receive revenue from affiliate & sponsored partnerships for sharing this content & when you make a purchase.Shopbot is a participant in the Amazon Services LLC Associates Program, an affiliate advertising program designed to provide a means for sites to earn advertising fees by advertising and linking to amazon.

Lucy Smith
Lucy is an Editorial Director at Shopbot Reviews. She oversees the Canadian team and has been writing about tech and video games for most of her adult life.
RELATED ARTICLES
Home & Garden

Give The Gift Of Reading – Children Books

Update Your Lights To Be Smart

Best Smart Gifts To Give This Christmas